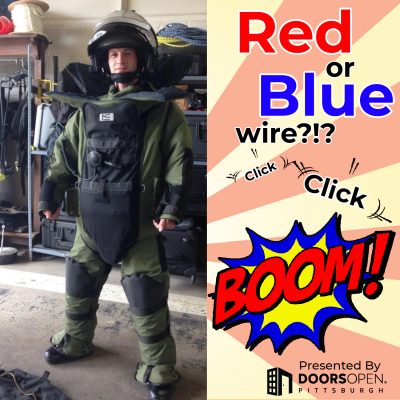 We have all seen the movie where someone has to choose whether to cut the red wire or the blue wire with the clock under ten seconds. But, what is it really like?

We have all seen the movie where someone has to choose whether to cut the red wire or the blue wire with the clock under ten seconds. But, what is it really like? Find out from Pittsburgh’s finest, the Pittsburgh Bureau of Police Bomb Squad Unit.
From bomb suits and tactical gear to robotic platforms and total containment vessels, this tour will take you on a rare glimpse inside the Bomb Squad. Learn about the history of the unit, since its formation in 1964, while you tour the building. See firsthand the various pieces of equipment utilized by this highly specialized team, and check out some of the devices encountered from actual calls the unit has been part of.

The Pittsburgh Police Bomb Squad was formed in 1964. Today the unit is comprised of 8 bomb technicians who receive extensive training from the F.B.I in electronics, render safe procedures and weapons of mass destruction.

The unit has six robotic platforms, and technicians utilize state-of-the-art technology, equipment and bomb dogs to ensure that Pittsburgh remains at the forefront of explosive detection and render safe procedures.

The unit also has certified scuba divers who can locate and render safe underwater hazardous devices. The Bomb Squad is dedicated to community interaction and participates in numerous community events throughout the year.

Restrooms are available
Photography is allowed
Other: Tour location may change. Ticket holders will be notified of any location change prior to a scheduled event.

NOTICE: Dates and times are subject to change under emergency circumstances beyond the control of DOORS OPEN Pittsburgh and the Pittsburgh Police Bomb Squad. In the event of cancellation, ticket holders will be notified at the earliest opportunity and tour times affected will be rescheduled.