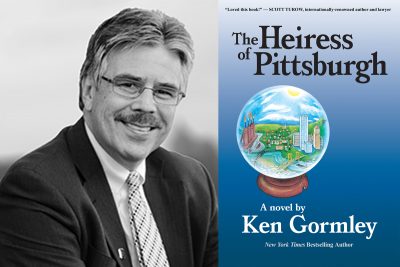 Made Local with Ken Gormley, Presented by Pittsbur...

Made Local lecture with Ken Gormley, author of The Heiress of Pittsburgh

Thirty years in the making, The Heiress of Pittsburgh is a love story about people, places, and simple virtues that flourished in the working-class towns of past generations. Pittsburgh takes center stage in this sweeping legal drama where well-known landmarks – from Kennywood Park, Carrie Furnace, and Union Switch and Signal in the Monongahela Valley; to the Cathedral of Learning and the Carnegie Music Hall in Oakland; to the Roselia Home in the Hill District; to Orphans Court in the Frick Building in downtown Pittsburgh – fill page after page.

Ken Gormley is the president of Duquesne University and the New York Times Bestselling author of The Death of American Virtue: Clinton vs. Starr (Crown 2010), which was named one of the top nonfiction books of the year by The New York Times and  The Washington Post.
Gormley has appeared on NBC’s Today Show, MSNBC’s Morning Joe, NPR’s Fresh Air, multiple PBS and BBC documentaries, and hundreds of television and radio shows in the United States and worldwide. His work has appeared in The New York Times, The Washington Post, The LA Times, Politico, HuffPost, and numerous other publications. The former mayor of his town in Forest Hills, Pennsylvania – a small community outside Pittsburgh – he lives there with his wife and family.

The lecture will be held at the Carnegie Library Lecture Hall on March 10th at 6:00 p.m. ET. For those unable to attend in person, a livestreamed option is also available. Register for virtual or in-person attendance at pittsburghlectures.org/ken-gormley/.

Registration for this event is free.

ASL interpreters are available upon request.