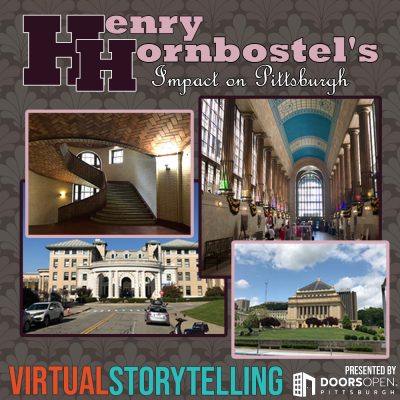 Join us for a Virtual Storytelling event touching upon Henry Hornbostel’s contributions to architecture and service to the Pittsburgh community.

Pittsburgh’s beautification efforts are ever evolving. Henry Hornbostel’s early twentieth century advancements in elegant architecture made Pittsburgh a leader in the City Beautiful movement. Employing his mastery of the Beaux Arts styles, Hornbostel won a series of design competitions–both locally and nationally. As architectural influences changed, Hornbostel adapted with his later work showing an original approach to design in the Art Deco style.

Henry Hornbostel’s accomplishments within the region expand beyond architecture. Notably, he was the first Dean of the College of Fine Arts at Carnegie Tech (now known as Carnegie Mellon). He also served as Director of Parks and Director of Aviation for Allegheny County.

Between his contributions to architecture and service to the community Henry Hornbostel deserves wider recognition, and storyteller Paul Tellers will explore why in this presentation.